A 3D Recreational Computer Game of Throwing Rings to Standing Poles for Windows with Moving Background
Objects like Boats and Birds , Replay for Each or All Throws and four Levels of Difficulty. Full Product $ 5.50 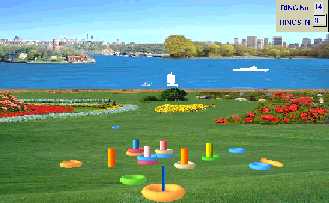 TryToAAC is a simple AAC converter for Mac. It can easily convert almost all video and audio files out there to the AAC format, for example, convert MKV to AAC, MP3 to AAC, MP4 to AAC, and FLAC to AAC, etc.
Downloads: 95610 - Shareware - Download Now

Bring all the ammo you can get your hands on, because open season just arrived - big time! Deer Drive is an arcade-style 3D deer hunting game. How fast is your aim? It`s just pure shooting action, as herds of deer are driven into your sights!
Downloads: 92376 - Demo - Download Now

A game about street racing. In the night city two rivals are leading a constant battle between themselves - street racers and police. Choose those who fit you more, and start the game! Become a street racer, win all races, earn money, buy new cars. O
Downloads: 68385 - Freeware - Download Now