Freemake Audio Converter is a new free tool that converts audio files between all key audio formats and prepares music for MP3 players, mobile phones and Apple gadgets. It accepts over 40 audio file formats (MP3, WMA, WAV, FLAC, AAC, M4A, OGG, AMR, AC3, AIFF, M4R) and makes it possible to listen to almost any audio in iPod, Zune, Coby, SanDisc and many others.

For each of the supported audio formats Freemake Audio Converter has several pre-defined presets. The powerful users can create a custom preset with the adjustment of bitrate, audio channels and sample rate of the output audio.

For those who would like to convert multiple audio files simultaneously, the audio converter provides the batch mode option. Also, the freeware allows users to join audio files into one and convert it to any of the supported output formats.

Freemake Audio Converter is optimized for netbooks and runs under Windows XP/Vista/7. It does not have any hidden costs or intrusive advertising. 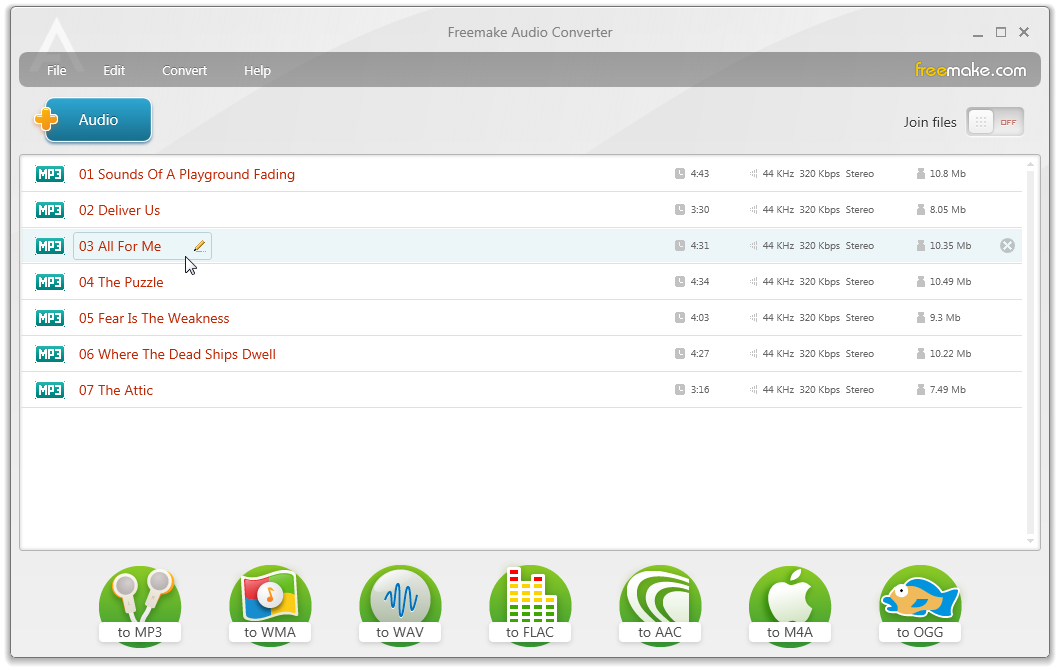 Alive MP3 WAV Converter converts MP3, WAV, WMA, OGG, and VOX files from one format to another. It is very simple and easy to use. Just right-click on files in Windows Explorer, select Convert to MP3 (or WAV, OGG, WMA, VOX), you done.
Downloads: 87547 - Shareware - Download Now

AVCLbas Audiobook Converter is an all-in-one AA Converter that can convert any audio books which could be played on iTunes. The conversion is 5X speed fast, and output could be CD Quality.
Downloads: 51301 - Shareware - Download Now

Pistonsoft Skype Recorder is a useful Skype add-on for anyone looking for a way to record their Skype conversations in great quality and save them as compact MP3 files locally on in their Gmail account accessible 24/7 from anywhere in the world.
Downloads: 49047 - Shareware - Download Now

Golden Records is software that helps you to convert your old vinyl LP records, tapes or cassettes onto CD or to wav or mp3 files.
Downloads: 91084 - Shareware - Download Now