Aiseesoft 4K Converter blazes a path for 4K converting. It helps 4K users to convert the downloaded or recorded 4K video to other 4K formats for higher compatibility, or compress 4K to 1080p HD, 720p HD and SD video. It also enables you to upscale HD or SD videos to 4K.Key features:1. Convert 4K videos to HD/SDImport your 4K video to 4K Converter, choose HD or SD format as profile and click Convert, you can convert your 4K video to any HD or SD video/audio formats as you like. So if you have some 4K video files which occupy much space on your hard disc, now you have a solution. After resizing, you will have more free space to save more files.2. Convert 4K video to popular formatsWith the development of 4K technology, you will find more 4K resources. For example, you may get a 4K camcorder and recorded some 4K video, or download some 4K videos from YouTube, but the format is not what you want. Under such circumstances, you need second consideration and comparasion before choosing a 4K converter to convert your valuable 4K video. Aiseesoft 4K Converter is the most professional one in the market for now. As it adopts the latest kernal, supporting all popular 4K encoding technologies, including HEVC/H.265, MPEG, XviD, VP8, VP9.3. Upscale video to 4KApart from down scaling, you can also upscale any of your video to 4K. By doing so, you will have one more way to get 4K content. The supported output 4K format including MP4, TS, AVI, WebM, MKV and FLV.4. Edit 4K videos as you like4K Converter also features the 4K editing function. You can use the built-in editor to adjust the brightness, contrast, saturation, hue and volume of the video, you can also add your own watermark to make your video more personable. Also, the trimming function enables you to get certain part(s) of the 4K video. It is also possible if you want to turn the 2D video to 3D. It has multiple 3D for you to choose. 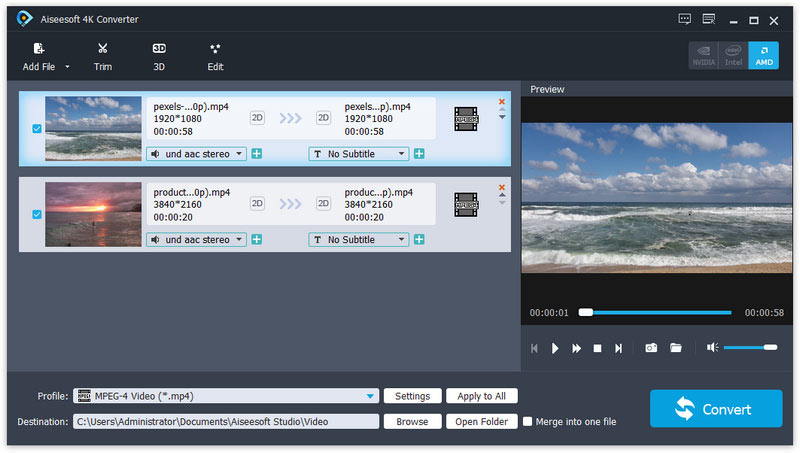